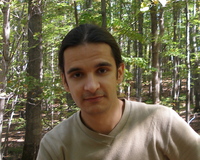 I was born in Kalampaka, Greece under the rocks of Meteora. In 2004, I entered the School of Applied Mathematical and Physical Sciences at the National Technical University of Athens (NTUA), from which I graduated in 2009 with a Diploma in Applied Mathematics. My major was in Applied Analysis and Engineering. During the year 2008-2009, I conducted my diploma thesis on the Direct Problem of Acoustic Wave Scattering, under the supervision of Professor Drossos Gintides.

In the summer of 2009, I moved to Durham, NC to continue my studies at the Mathematics Department of Duke University. My research interest is in Mathematical Physiology, mainly in Renal Hemodynamics. Since the summer of 2010, I have been working on a model of the renal afferent arteriole. The goal of the project is to understand the interactions between blood flow, autoregulatory mechanisms, and kidney functions under physiologic and pathophysiologic conditions.

Mathematical Physiology: Blood flow autoregulation is an essential factor of proper renal activity. In the microcirculatory level, it is mostly achieved by the afferent arterioles which are vessels capable of adjusting diameter and so of determining blood delivery to the nephrons where the main renal functions take place. In order to regulate blood flow, afferent arterioles respond to signals initiated by two major mechanisms: tubuloglomerular feedback, and the myogenic response. My work focuses on the latter and involves the integration of cellular, vascular, and hemodynamical properties into multi-scale mathematical models that can be used to study the renal autoregulatory process.

Computational Fluid Dynamics: Many biological scenarios involve fluid motion in domains of complex geometry and deformable boundaries that commonly result in nontrivial fluid-structure interaction problems. My interest is on numerical methods capable of computing solutions to such problems.